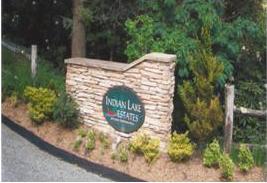 Indian Lake Estates is a private, restricted community located in Lake Toxaway off  Slick Fisher Road. The homeowner’s  association is Indian Lake Club, Inc.  The first homeowner’s meeting was held in 1973.  The association was incorporated in 1975 and is managed by a Board of Directors.

The altitude of the community ranges from 3200 to 3400 feet.  The land is heavily forested and comprises 200 acres, divided into 144 lots.  The size of the majority of lots is an acre.  Currently, there are 102 owners and 54 homes.  Thirty-three owners live in the development or nearby. Twenty-six families call  Indian Lake Estates home year round.  Part-timers are in residence from one to six months each year.

There are two lakes on the property.  The smaller one, Rainbow Lake, covers approximately two acres. It is fed by a stream crossing Slick Fisher Road that flows year round.  It discharges into the larger lake, Indian Lake, through an earthen dam and is considered part of the Indian Creek Watershed.  Indian Lake covers 9 acres and is fed by Indian Creek, two smaller streams, and Rainbow Lake.

Indian Lake is assigned to the Tennessee River Basin and the Savannah River Drainage Area.  The lake discharges through an earthen dam into Indian Creek, which crosses Kim Miller Road below the Post Office and empties into the Toxaway River at the Catatoga development on SR 64.  Both lakes boast fish – bass, trout, bream, catfish and others.  Beavers inhabit the opening to Indian Lake, helping to control silt build-up.  Both dams are monitored by the North Carolina Department of Environment and Natural Resources (DENR).

The community has its own water system, monitored by the DENR, and managed by a local water company.  There are no meters on houses; the water system cost is financed by the annual assessment. Utilities are underground.  There are four miles of paved roads, with community turn-outs at dead ends. The roads and roadsides are maintained year round.

The community has a waterfront park with tables, benches, a grill, boat racks, and a dock.  The area was constructed mostly by volunteers and paid for by fundraisers.  Weekly gatherings at the park are a summertime event.  Boats are mostly canoes, with a few john boats.  Gasoline motors are not permitted.

Assessments – home owner’s fees – are adjusted annually by the Finance Committee, as the budget for the ensuing year is developed.  The budget is divided into two categories:  Operations – General and Water System, and Infra-structure – Current and Future Needs, projecting 3 to 5 year projects.  The 2014 assessment is $984 per lot.  The fiscal year for Indian Lake Club, Inc., begins 1 January and ends 31 December.

Questions can be directed to the Secretary – Barbara Pence, or the Treasurer – Jeannette Lee, at Indian Lake Club, Inc., PO Box 371, Lake Toxaway  NC  28747-0371.  The Club email is ilcsec@comporium.net.